This past Saturday, I ran my first-ever Crim (a ten-mile race in Flint, Michigan). This was an extra-special race to me for a few reasons: 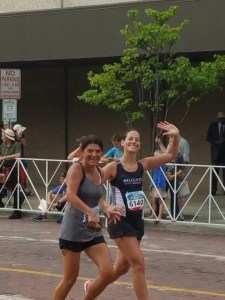 My mom and sister finishing strong and happy 🙂

I’m proud of my time, but I’m not writing this entry to brag (that would be a pretty short and obnoxious entry). The reason I want to reflect on the race is because I came out of it with a new mantra of sorts: I’m strong enough to surprise myself.

I mentioned before that I sometimes like to pretend I’m a fairy when I run. This is helpful at times, making me feel lighter, more graceful, and more carefree than I might otherwise feel in some instances. But there are also times when my legs, lungs, or body in general feel so heavy that it is impossible to imagine myself as anything more sprightly than an ogre or gargoyle. These instances are the ones in which words like strong, grit, power, etc. resonate more for me than concepts of lightness or flying.

I’m not entirely sure why the word “strong” emerged in my reflecting on the race v. “fast,” but I think it’s because I didn’t necessarily prove to myself I was any faster than I already knew I was. I’d been doing speed work and some shorter races for the past few months, so running at a sub-seven-minute pace didn’t feel entirely unnatural to me. I just didn’t know I would be able to sustain that pace for all ten miles of the Crim.

When registering for the Crim I had entered my predicted finish time as 70 minutes, but this was more of a dream time and an actual goal time. The only other ten-mile race I’d run (back in May), I ran in 1:13, and it was an almost-entirely flat course (the Crim is notorious for a hilly patch known as the Bradley Hills). I’d run a 10K later in May in 43 minutes,  but I definitely didn’t feel like I could run nearly four more miles afterward.  My goal for the Crim was a loosely-worded and non-committal one–“try to PR, and try to run as close to 7-minute miles as possible, but we’ll see what happens, and we’ll see where I’m at”–and it was padded with several excuses and justifications as to why I probably wouldn’t succeed (the hills, my “marathon training legs,” my unfamiliarity with the course, etc.)

I’m not saying that it’s necessarily a good idea to forgo goal setting and I’m definitely not condoning excuses, but I think what I’m getting at is that by not defining any sort of rigid expectations for myself, I created a space where I could surprise myself by exceeding my expectations. And within this space, I discovered something new, in addition to my mantra: the magic of using a pacer .

Pacers are the people who commit to running an exact pace per mile for the entire duration of a race, and they typically hold signs indicating what pace that is (either in minutes per mile or finish time).  They’re planted in corals so that people with concrete time goals can use them as guides and/or reference points.

Saying that I used a pacer might seem contradictory to what I just said about my lack of goals/expectations, but I think that the two things went hand in hand for me.  In the past I’ve used pacers as measurements of success and failure. For example, “Yes! I am beating the 3:20 marathon pacer, I’m awesome and I’m doing soooo well.” or  “F! The 3:35 pacer just passed me. I suck and I’m losing.” But my relationship with my Crim pacer was different.

The 7:00 (min/mile) pacer for the Crim was like a meditation object for me; a mandala of sorts. This might sound a bit creepy, but hopefully when I elaborate it will sound less so…

I wasn’t anticipating pacers at the start line of the crim, but when I approached my coral I saw one holding a 6:30 sign and another holding a 7:30 sign. I knew that I wouldn’t be trying to keep up with the 6:30 group, and I hoped I’d be ahead of the 7:30 one.  I told myself that if I got passed by the 7:30 sign at any point, I should step it up. I was wearing my Garmin, too, and I thought I would be using that to make sure that I wasn’t dropping too far below seven minute miles during the first few “easy” miles of the race. Lack of goals aside, I wanted to at least run smart, fast-ish, and finish strong if for no other reason than to feel confident for the remaining period of Chicago Marathon training. (A Garmin though is NOT a meditation object. It’s perhaps the antithesis of one…)

Anyway, my guiding-star 7:00 sign appeared just minutes before the start of the race. He positioned himself a few people in front of me and, for whatever reason, I felt my pre-race nerves (which seem inevitable despite looser expectations) relax; nervous energy dissipating out of me with each breath I took while focusing on that sign.

My usual Maria mindset would have been “I have to stick with that guy the whole time,” but despite focusing all of my attention on the pacer, I was able to do so in a somewhat detached way. This allowed the race to be, in many ways, a moving meditation. 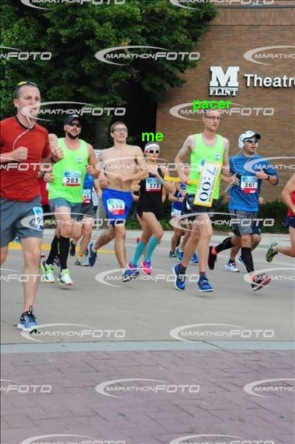 As expected, the first few miles felt almost effortless; flying without trying. But I knew that hills were on the horizon and the likelihood of me maintaining that pace without significant effort was slim, but not impossible. I didn’t think too much about it, but I told myself that it was okay if the pacer lost me.

Sure enough when the hills came, I didn’t try to keep up with the pacer as he seemed to glide effortlessly up and over each hill. But I did still keep my attention on him, and without me consciously willing him to be (i.e. by forcing myself to run faster so he would be) he was always in my site.

This was the part that really started to feel like magic. Speed came with patience, mindfulness, and relaxation; not with trying to muscle through, anticipate, or control anything. There were moments where my legs felt heavier and/or my breath and heart rate felt faster than comfortable, but rather than focusing on the discomfort, labeling it as such, and then rabbit-holing into any sort of “well, I’m F’d now” mindset, I stayed in the moment, focused on the pacer.

Having my attention on something outside of my own potentially-anxious thoughts prevented me from engaging any voice that might nag me about how things hurt or tell me that I didn’t have it in me to maintain the pace I’d successfully and (relatively) effortlessly maintained thus far. And what was so awesome about this was that I got to experience my body silencing that voice that could have been loud if I had in fact engaged it. The effort in my legs didn’t feel like pain, it felt like strength, and the more I felt it, the stronger I felt, and I was able to experience my heart racing and breath quickening without panicking or slowing. Magic! 😉

I think whatever felt magical about my experience using a pacer was as much routed in detachment as it was in concentration. I kept my attention on him, but I also told myself that it was okay if I lost him. This reminds me of what Roland Barthes says about anxiety in love in A Lover’s Discourse.  He writes that the only way to not feel anxious about losing somebody you love is to be reminded, “Don’t be anxious anymore–you’ve already lost him or her.” I used to read this quote as a somewhat dark, sad, and cynical one, but thinking about it more I think that what Barthes is saying is that love exists in the space void of anxiety, which is characterized by detachment. We tend to lose what we hold onto too tightly, but we don’t always lose what we let go of.

Or, sometimes you do lose what you let go of, and it’s for the better!

My “I’m strong enough” mantra kicked in at about the seventh mile mark. Three miles to go, and now that the hills had subsided I was much closer to the pacer. I knew I could stay with him at least another mile, and then at least another after that, and then probably another after that. A little into mile eight, the pacer and I were side by side and he spoke to me for the first time.

“Oh. no. Just trying to stick with you,” I responded (in typical self-deprecating Maria fashion).

“Well, we’re coming up on mile nine. I won’t be offended if you want to take off without me then.”

Because I hadn’t expected to still be running at a 7 minute/mile pace, I hadn’t even considered finishing below this pace. But at mile 9, I did “take off.” I ran my fastest mile, and it didn’t feel like flying (not even on the downhill finishing stretch!), but it did feel strong*. Very curious to see how focusing on a pacer (one slightly slower than the 7 minute/mile one 😉 )might impact my race in Chicago next month!

*To say that I credit my 62-minute “relationship” with this man for my self-deemed successful race would be failing to acknowledge several other people to discredit several other people and factors–most notably my former Hellgate Road Runners Group and coach, Jared Mestre (who I still train “with” in spirit) for encouraging me through the last few months of speed and hill work, making be both stronger and faster. 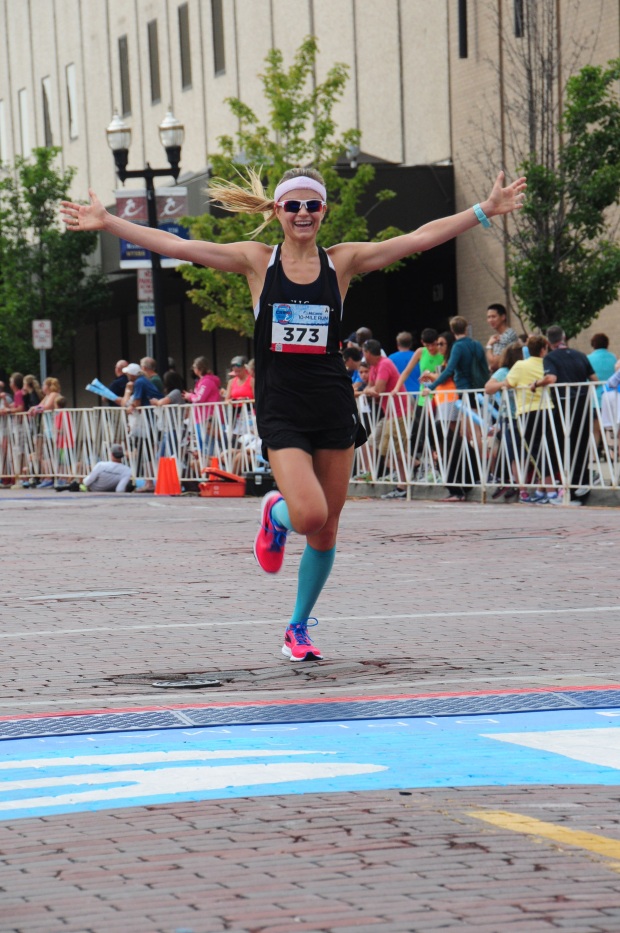