“I am a runner because I am willing to lay it all on the line. I know that every finish line has the potential to lift my spirits to new highs or devastate me, yet I line up anyway.”

I’ve been obsessed with this John Bingham quote lately. In my Boston recap entry I wrote a bit about the relationship between running and control, and I think that his quote perfectly negates that relationship.

Line up anyway. These three words speak directly to the ambiguity of running a marathon (to the ambiguity of any situation a person might willingly enter without a guaranteed positive outcome, really). Why do anything that might hurt or devastate you?  Why risk becoming dispirited? Not “lining up” is just as easy, and even just as understandable of a choice. (If not more of one–I think a person is more likely to ask why run marathon(s) than why not run them.)

A more-often used, but perhaps comparable sports metaphor is baseball’s “stepping up to the plate.” Every time a baseball player goes to bat is a sort of  risk/reward moment. It seems like the odds are that they’ll strike out, but they step up because of the possibility that they might get a hit, might get to one of the three bases “safe”, and might even hit a home-run (and obviously also because the game depends on them doing so).

I think what makes lining up for a marathon scarier than stepping up to the plate in baseball is that the ambiguous space you are stepping into is a bit more vast. It’s not a pitch-pitch-pitch-OUT!  or pitch-pitch-pitch-HIT! series of moments, and then you line up again another inning or so later. When you cross the start line of a marathon, you willingly step into a multiple-hour journey that will probably try you on every level of existence that you believe in, and probably (though temporarily!) defeat you on some of those levels.

The more I think about it, I think the key word in the above quote, for me, is willing: “I am willing to lay it all out on the line.” Obviously, because this quote is written by and for runners, it is meant to be motivational, and I certainly find it to be. But at the level of the human will, I’m not sure it’s so easy to say willing is good/positive and unwilling is bad/negative when it comes to the will to lay anything out on the line. The state of having laid everything out on any line, be it actual or metaphorical, is an incredibly vulnerable state to be in. You risk being gutted. And who in their right mind would want to willingly subject themselves to that risk?

I think the answer to that question is: people in the right heart. It’s not necessarily irrational-minded people who haven’t considered the risks/rewards of a situation, but people who do consider them, but let their hearts speak louder than their minds. You can rationalize your way out of any risky or ambiguous situation, but then you squash whatever potential you might have realized by fully entering it. (I’m not just referring to running.)

The above John Bingham quote perfectly articulates what I love, admire, and respect in marathoners (both actual and metaphorical ones 😉 ) and what I aspire toward in being one–strength in willingness. Willingness to not only cross a start line, but to dive head and heart first into the hazy space between start and finish, devoted to seeing the whole journey through all of its ups and downs, calms and storms, ecstasies and aches; true to the end, and then on to another start. 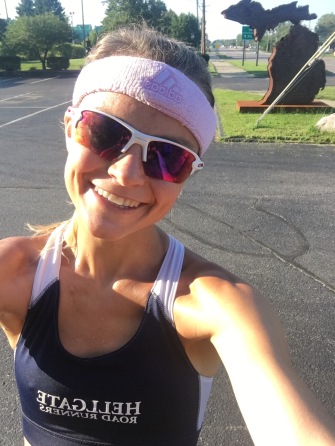 Currently training for the 2016 Bank of America Chicago Marathon